The earth is the Lord’s and all that is in it, the world, and those who live in it. Psalm 24:1

Care for creation intersects with racial justice and the health of the soil, water and air. This work looks unique in different parts of the state based on the people who live there, ways the land has been used, and species and landscape elements present in each region. We will learn about some of Oregon's environmental justice concerns and the organizations working on them through a series of six webinars this summer. Mark your calendars for the following events:
July 22: Portland Harbor Community Coalition's Cassie Cohen (watch now)
Aug. 5, 7-8:30 p.m.: Verde's Oriana Magnera (learn more | (register)
Aug. 19, 7-8:30 p.m: Rogue Climate's Allie Rosenbluth (learn more | register)
Sept. 2, 7-8:30 p.m.: Eloheh Center for Earth Justice's Randy Woodley (learn more | register)
Sept. 16, 7-8:30 p.m.: to be announced
Sept. 30, 7-8:30 p.m.: to be announced

The Creation Justice programs of Ecumenical Ministries of Oregon activate congregations seeking to improve their practices of environmental stewardship and environmental and ecological justice.

Our mission is to love God’s Creation through education, relationships and advocacy.

Education. We provide congregations with information to improve their practices of environmental stewardship and environmental and ecological justice by:
> Making theological and eco-theological, scientific, public policy and practical skills educational materials available.
> Delivering and sponsoring lectures, seminars and workshops.

Relationships. We help congregations build relationships to improve their practices of environmental stewardship and environmental and ecological justice by:
> Establishing and maintaining regularly scheduled meetings of faith communities around the state.
> Creating opportunities to share stories, build on successes, and learn about best practices.
> Listening deeply and responding appropriately to local concerns.
To learn how to join a regional Creation Justice Circle, contact Cherice Bock, cbock@emoregon.org.

JUST VOTE: EcoFaith Recovery and EMO's Oregon Interfaith Power & Light (OIPL) are teaming up to offer training and support for faith climate justice voters. Between now and November, join with IPL chapters all over the country to help register people to vote, encourage everyone to vote for climate justice, and educate ourselves and one another about climate and environment-related policies. Check out the resources available at the Just Vote website, and sign up to participate in gatherings on the first, third and fifth Thursday mornings from August to November. 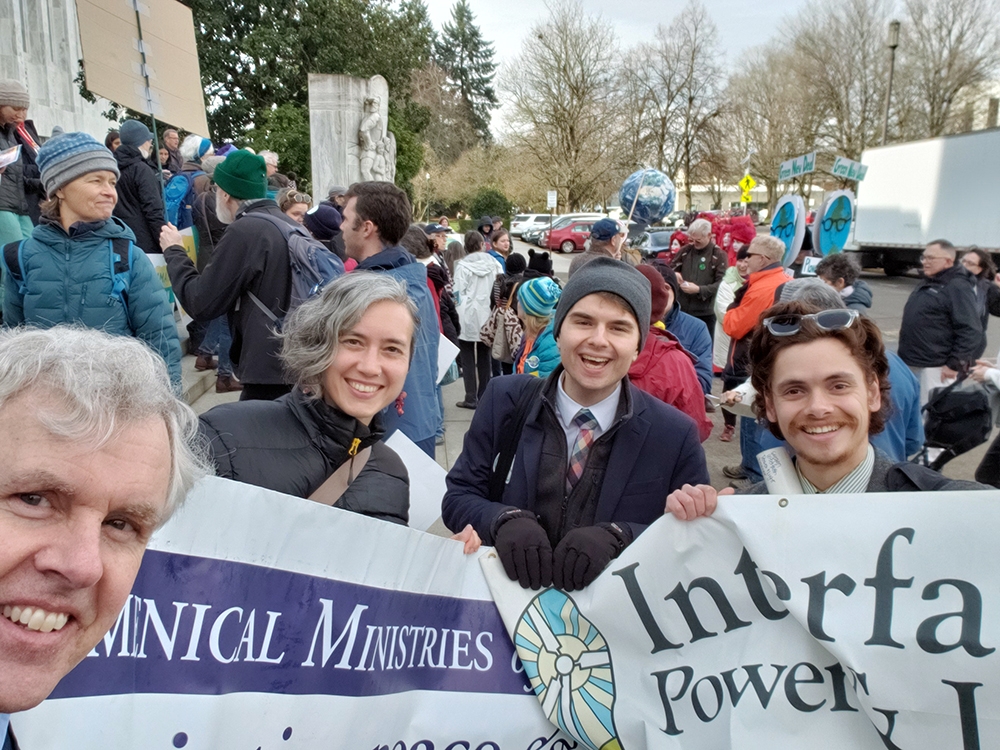 Ecumenical Ministries of Oregon staff and Creation Justice Committee members are working hard to advocate for the moral reasons to adopt strong environmental policy, with a focus on those hardest hit by climate change and pollution. We joined Renew Oregon's day of climate action in Salem, and we met with legislators to bring a faith-based message of support for SB 1530. In combination with many other partner groups, EMO's work to emphasize environmental justice has been instrumental in ensuring that SB 1530 includes language to protect frontline communities and make sure they have more say over how funds are used.

In line with environmental justice organizations in the state, EMO wrote to support House Bill 4067A, which worked toward equitable rates for low-income and other under-served customers of Oregon’s Public Utility Commission. This bill emphasized environmental justice so that energy costs remain affordable, particularly in communities of color and other communities on the front line of climate change and pollution, even as new forms of energy are pursued and implemented, ensuring it is the polluter who pays rather than those who can least afford it.

View EMO's letter to Senator Dembrow on HB 4067A. We will continue to work to enact this important legislation in the future.

View film Our Voice, Our World, Our Future explores the effects of climate change on low-income communities in Portland, Oregon
Often unrecognized as a serious social concern in our region, the film focuses on how climate change impacts the lives of Portland's most impoverished and vulnerable people.  The film is a project of Wagging Tale Productions, Rosemary Anderson High School and Ecumenical Ministries of Oregon. Join four Rosemary Anderson High School seniors as they examine climate change through the lens of local public opinion, pollution, health, economy, community impact, and homelessness. The film features two of the student’s senior year projects. In addition to an exploration of climate change, Our Voice, Our World, Our Future gives voice to young people from communities that are often overlooked in environmental conversations but, as we discover, are often the most vulnerable to the impacts of environmental degradation. We genuinely thank the East Multnomah Soil & Water Conservation District for generously supporting this project through their grant program.

Our Voice, Our World, Our Future has been nominated for "Best of the Northwest Awards."

View film below or watch it on EMO's YouTube channel.

If you are interested in holding a screening, Q & A with the filmmaker and presentation on local/state climate change policies for your neighborhood association, congregation or organization, please contact Jane at jturville@emoregon.org and include your name, group that you are affiliated with and date/time that you would like to hold a screening.

Jordan Cove LNG Pipeline – A Creation Justice Perspective
Read on to explore how primary environmental values of love and stewardship can be used to evaluate proposed projects such as Jordan Cove. EMO Jordan Cove Statement.

Statement on New Source Performance Standards
Creation Justice Ministries statement in response to Acting Administrator Wheeler and the EPA’s decision to weaken common-sense health and climate protections, known as the New Source Performance Standards (NSPS), which limit methane and other toxic pollutants from being released into the air (Sept. 11, 2018). Read statement.