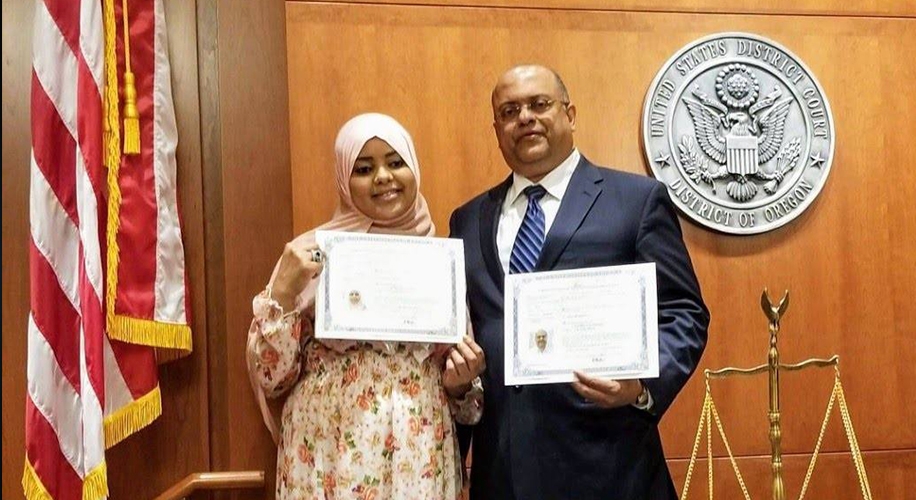 Saalim Saalim spent twenty-three years in and out of a refugee camp in Kenya. He was born in Somalia to his Indian mother and Yemeni father, but even the cultural diversity of his family and community didn’t prepare him for the culture shock he would experience upon arrival in the U.S. In an interview with Eric Dodson, citizenship instructor at SOAR Immigration Legal Services, Saalim described what it was like learning that his time for resettlement had come. “I did not believe it when we saw our names on the board. They called me and my family to the office to book the flight. I couldn’t believe it. I found myself in America and of course,we had culture shock in the beginning. Life is almost the same in the towns of Kenya, but in a refugee camp, things are totally different. When you spend so much time in a camp and then you come here, you get culture shock.” He says they chose Portland in order to join relatives in the area and live in a community where he could receive guidance from his family and the greater Somali community.

Saalim and his family were resettled through SOAR Refugee Resettlement in 2012. He remembers working with Yelena. “They gave us things that we needed to start our lives. They referred us to IRCO and other organizations to help us adapt.” 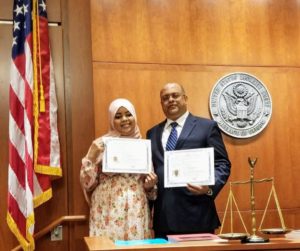 Saalim and his wife Fatuma attended English classes and applied for citizenship when the time came. “I felt comfortable coming back to SOAR to ask about citizenship.” Saalim and Fatuma were students in Eric’s class for nearly a year before they became citizens in their judicial naturalization ceremony in Portland in July of 2018.

Saalim spoke fondly of the support he received from his family, SOAR, IRCO, and the local Bajun community, but what makes him truly amazing is that he didn’t stop reaching out and forming a network when the dust of his family’s transition settled. He decided to create his own non-profit organization- before he even became a citizen. Saalim is the founding director of HAKI Community Organization which offers programs for intercultural learning and engagement to connect the Somali community.

“Since coming here I received lots of help. I just sat back and thought one day that it’s time to give back to the community. I would drive them [newly arrived refugees] to places in case they needed food stamps and things like that. It’s just inside me. I felt like helping people, so that’s why I decided to start a non-profit organization so I can help more people and help them reach their goals.” His work at HAKI is a true community-building effort. “Some of us [immigrants] don’t go out very often, they just lock themselves in. We get a lot of discrimination especially form landlords, so that’s why I say let me stand here and help my people,” and he’s not shy about encouraging others in his community. “I tell them, “Go out! Do ESL classes and computer classes! Go to the library and learn something! Go to PCC and meet people!” These things certainly proved worthwhile for Saalim. He did all of this while juggling his work in the Senior Services Program at Neighborhood House.

“The class motivated me with the student and the teacher. Eric’s class has that welcoming atmosphere and you feel like going to class even if you are tired from work.” It should be noted that everyone in this class’ favorite part of the class might not actually be the learning, but the tea time and hospitality they share before beginning the lesson. A tradition started by none other than Saalim and Fatuma.